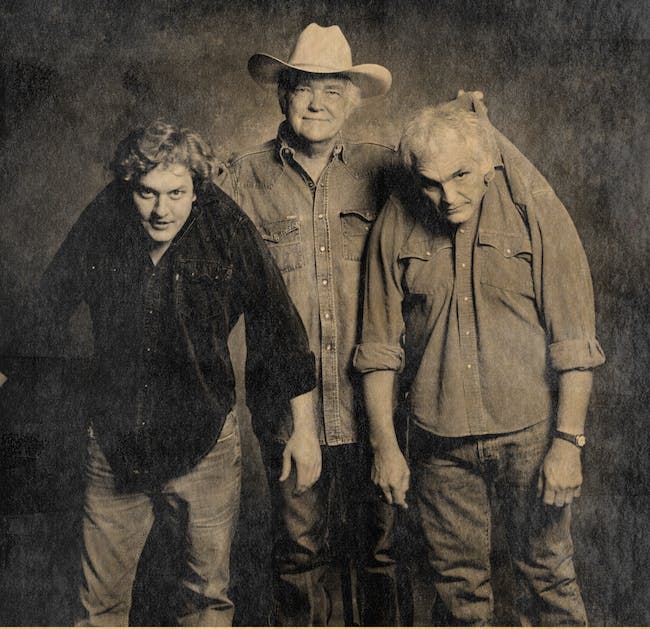 It was just another one of Guy Clark’s keen ideas to introduce the “Okie” and “Arkansawyer”. He knew them both well but they didn’t know each other when they all took the stage that night in Little Rock over twenty years ago. With Camp on his left and Thompson on his right, Guy broke into “Texas Cookin’”. When the smoke cleared a couple of hours later, a strong and steady friendship was born.

Thompson continued performing with Guy Clark on the road with Camp joining them when he wasn’t busy writing hit songs and touring behind his own releases. Guy always said he’d “hire Shawn full time if I could afford him!”

The names Camp and Thompson appear on many Guy Clark recordings as well.

Thompson collaborated with Clark on the title track of the 1992 “Boats to Build” album and shared co-producer credits on several projects including “Workbench Songs” and “Somedays the Song Writes You”, both Grammy nominated for Best Contemporary Folk album.

Camp won the Americana Album of the Year Award for co-producing “This One’s For Him: A Tribute to Guy Clark” and then went on to win a Grammy for producing Clark’s “My Favorite Picture Of You”.

So you get the idea. These two “yayhoos”, as Guy called them, have spent a big part of their lives in the trenches with Guy Clark...supporting him, learning from him and loving him. Now they’ve decided to come together in performance to share some special memories and the unforgettable music of their old friend Guy Clark.