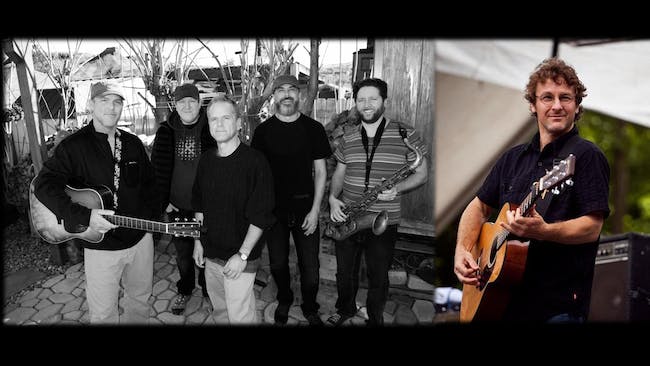 Todd Sheaffer is the lead singer, songwriter, and guitarist for Railroad Earth, who are currently on tour with their latest EP release "Captain Nowhere". In addition Todd continues his solo work, performances with various friends, and reunion concerts with his long-time friends and bandmates "From Good Homes"

CORAL CREEK is a nationally acclaimed Colo-Caribbean Newgrazz band featuring the original music of Chris Thompson and Bill McKay (formerly of Leftover Salmon and Derek Trucks Band). Inspired by the islands and the mountains alike, CORAL CREEK conjures a unique vibe, delivering big sounds and high-energy shows that appeal to audiences across the newgrass, rock and jamband spectrum. Drawing influence from legends like John Coltrane, Jerry Garcia, Tony Rice, Professor Longhair and Dr. John, don’t be surprised when CORAL CREEK launches into a second line jam with tenor saxophone soaring over organ swells and a rolling banjo. Listen close and you might even hear some steel pan and coqie frogs. CORAL CREEK launched into the heart of the Colorado music scene with the release of The Road Ahead (2010), produced by Bill Nershi of the String Cheese Incident. The addition of Bill McKay on keyboards and Nathan Peoples on saxophone solidified the unmistakable sound that is CORAL CREEK today, as captured on the eponymous album CORAL CREEK (2015) and FREE DOG (2018) – both produced by Tim Carbone of Railroad Earth. FREE DOG has all the lyrical imagery, tasteful harmonies and outstanding musicianship that you’ve come to expect from Colorado’s hottest up-and-coming band, once again transporting listeners from the heights of the Rockies to the sweet sands of the Caribbean Sea – hitting every honkytonk, bayou and beach bar along the way.