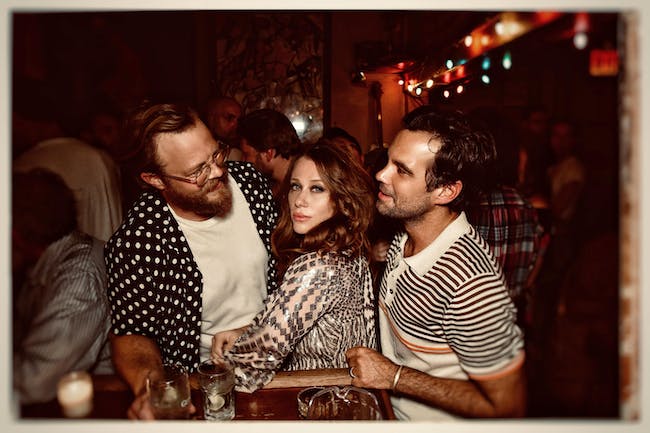 “I want it to bring comfort,” The Lone Bellow guitarist Brian Elmquist says. “But it’s not all hard conversations. There’s a lot of light and some dancing that needs to happen.” Brian is reflecting on Half Moon Light, the band’s highly anticipated new album.

Half Moon Light is an artistic triumph worked toward for years, earned not by individual posturing, but by collective determination and natural growth. With earthy three-part harmonies and songwriting as provocative as it is honest, the trio made up of Brian, lead vocalist Zach Williams, and multi-instrumentalist Kanene Donehey Pipkin creates sparks that make a stranger’s life matter or bring our sense of childlike wonder roaring back. On Half Moon Light, The Lone Bellow mix light and dark to muster a complex ode to memory, a call for hope, and an exercise in empathy. Anchored in the acoustic storytelling that first so endeared the band to fans and critics, Half Moon Light also takes more chances, experimenting with textures and instrumental fillips to create a full-bodied music experience. The result is The Lone Bellow’s most sophisticated work to date.

“We try to invite as many people into the process to see what we can make together,” Brian says. “I like that spirit and that freedom. Then, the songs speak for themselves.”

That wholehearted embrace of collaboration defines Half Moon Light. The record marks a return to recording in New York with Aaron Dessner, whom the band counts as both a hero and a friend. “We already had a friendship with Aaron and a strong, shared understanding of our musical vision,” Zach says. “It’s really important to us to be a part of a community of musicians. We like that way of making something. Aaron showed us a new way of trusting. His idea of bringing in Josh Kaufman and J.T. Bates was such a beautiful gift. The meekness that these friends brought to the table was something that we will never forget. A sense of controlled fury. Lightning in a shoebox

Every pair of tickets for this show includes a digital download of The Lone Bellow’s new album, Half Moon Light, (available February 7, 2020). Approximately 7 days after purchase, you will receive an additional email with instructions on how to redeem your album. US/Canadian residents only. Not valid for Fan to Fan Resale.

To customers who purchase tickets in person - Every pair of tickets for this show includes a digital download of The Lone Bellow’s new album, Half Moon Light, (available February 7, 2020). To take advantage of this offer, please email help@MusicRedemptions.com and let them know you purchased directly from the box office.

• Invitation to ‘The Shindig’ which includes:

• Meet and Greet with The Lone Bellow

• One (1) exclusive Shindig Color Half Moon Light vinyl, signed by The Lone Bellow

NOTICE - Concert ticket is not included in VIP package and must be purchased separately.