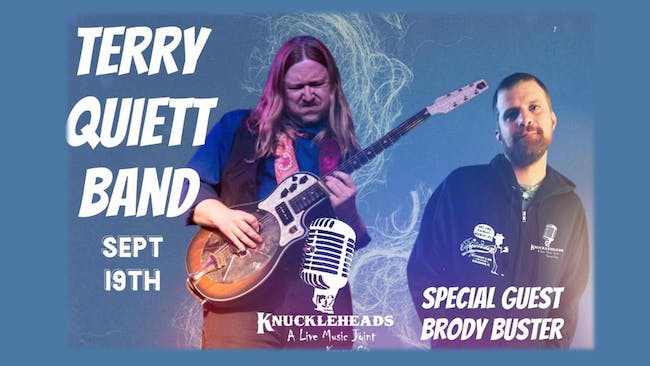 Brody Buster is a blues and rock musician from Lawrence, KS. He's a former harmonica child prodigy and has been featured on countless TV shows, including the Tonight Show with Jay Leno, Dateline, Crook & Chase, and the Jon Stewart Show. Even Baywatch Nights and Full House showcased Brody's talents.

In just a few years the Terry Quiett Band has become a mainstay across America’s Heartland. From 6th Street in Austin…to the windy city of Chicago…through the mountains of Colorado…across the deserts of Arizona…jamming down on Beale Street in Memphis…wherever they go the TQB has won over young and old with their energetic and soulful sound.

The band has spent the last several years on hiatus, but are jumping back into the scene with a brand-new EP of original music entitled Truth & Intent to be released on May 16, 2020 at the historic Orpheum Theatre in Wichita, KS. This album finds Terry reuniting with the original power trio from Cut the Rope and Just My Luck, featuring his long-time drummer Rodney “Shotgun” Baker and bassist Rev. Aaron Underwood. Truth & Intent contains a batch of energetic and groovy tunes TQB fans will find a fresh extension of the soulful blues rock they love.