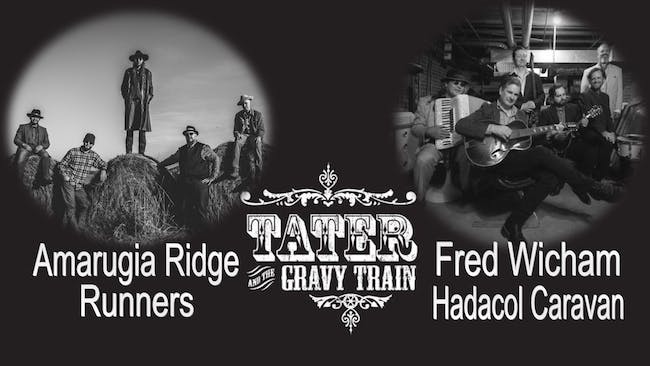 Tater and The Gravy Train with Fred Wicham Hadacol Caravan

Tater will be doing Bee Gees music before the show so come on out early at 6:30!

Fred Wickham & The Hadacol Caravan are an exciting six-piece band playing their own mix of country, blues, jazz, rock and roll, bluegrass and whatever else might hit them at any given moment. Now touring in support of Fred's debut solo record Mariosa Delta, the band features some of the Midwest's best roots musician's, including Fred's former Hadacol bandmate, Richard Burgess on upright and electric bass, Marco Pascolini on pedal steel and electric guitars, Matt Brahl on drums, Cowboy Bart Colliver on keyboards and accordion, and Fred Wickham, Jr. on mandolin.

The Amarugia Ridge Runners! Their name comes from the Amarugia Highlands conservation area south of Freeman, Missouri and roughly 49 miles south of Kansas City, Missouri. They are a group of four young and adventurous musicians raised in the deep history and folklore surrounding the highlands. The Amarugia Highlands have historically been home to mysteries, moonshiners and music. Their connection to that land and love of the rich history has drawn them together. They perform a mix of folk, blues, old country, and bluegrass. They've all come together to create amazing music and long-lasting memories.