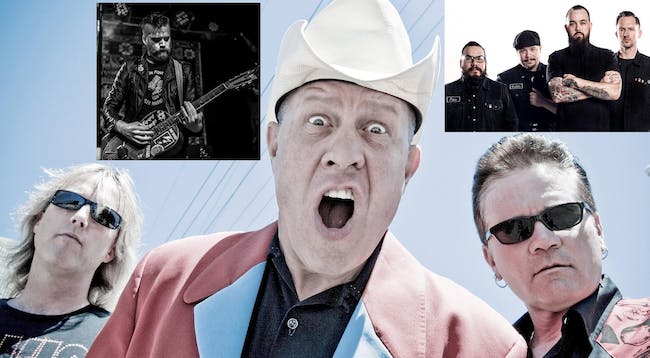 Formed in 1985, THE REVEREND HORTON HEAT exploded on the scene by playing gigs around their hometown of Dallas, Texas, mixing elements of surf, country, punk, big band and rockabilly to create a genre that took the world by storm. Often imitated, never duplicated, the Rev has continued to garner the support of both the underground rockabilly/ psychobilly scene and mainstream critics. Throughout the band's million plus album selling career, their music has been featured in countless TV shows, movies and commercials, it's impossible to deny the powerful force that is THE REVEREND HORTON HEAT. They continue to electrify audiences time and time again with their incredible stage presence, rock 'n roll charisma and contagious energy.

The Delta Bombers have smashed stages all over the world for 10 years. Driven by a hybrid of 50’s rock and roll fused with swampy blues, country, and rockabilly. The hard touring band’s haunting but powerful voice Chris Moinichen keeps the sounds fresh and always from a new angle.

Armed with old bastardized mid-century guitars, hand-me-down fiddles and banjos, home-made contraptions with just enough tension on a string to be considered an instrument and any random percussive item he can get his hands or feet on, Lincoln Durham is a Southern-Gothic Psycho-Blues Revival-Punk One-Man-Band with a heavy amped edge, preaching the gospel of some new kind of depraved music. With driving guttural beats backboning various growling stringed instruments Lincoln gives birth to a sound that transcends genres with his dark, poetic and raw writing style telling tales that E.A. Poe would have been proud of.