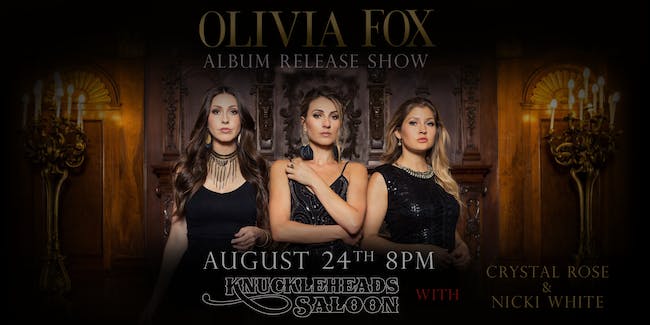 As the band was crafting their sound and identity, Lauren again called upon her team of DJ and Tyler to help create a hybrid style of incorporating programmed beats and synth pads with traditional folk melodies, harmonies and live instrumentation.  In June of 2017, OLIVIA FOX released a self-titled six song EP that was engineered, mixed, and mastered by Tyler Banks and showcased the variety of sounds and musical textures that is OLIVIA FOX.  Music critic Bill Brownlee said OLIVIA FOX is, "one of the most fully realized musical acts in Kansas City. The polished group is radio-ready and eminently marketable. That's clear on ‘Play the Game,’ the lead track of the group’s self-titled 2017 EP. As synthetic beats contrast with traditional folk harmonies, the hushed song becomes a wondrous combination of tension and tranquility — as enticing as a romantic whisper.” “Play the Game” has been released nationally to Triple A, Non-Comm, and Alternative radio formats and has received consistent airplay in many markets.  Along with their debut EP, OLIVIA FOX has digitally released three singles with their latest single "Easy" released June 1, 2018.

"Nicki is an amazing down-to-earth young songwriter with a distinct Midwestern flair. Nicki’s sound is genuine and heartfelt with an underlying tone of “I mean business”. She has a strong sense of family & friends and yet
delivers very direct lyrics and “grab you” songs." -William Saunders

Crystal Rose is a talented Haitian-American artist with a unique background. Born in Orlando, but based in Kansas City, MO, Crystal has been passionate about music ever since she was a little girl. Music was just something that came natural to her.

Crystal doesn’t sing just to entertain people. She wants to inspire, and express something deeper, with a focus on channeling powerful emotions through her live performance. She is influenced by iconic artists as diverse as Whitney Houston, Christina Aguilera, Bon Iver, and Jonny Lang (only to mention a few)

From pop, to soul, anything is possible for this KC-based artist, who relentlessly performs throughout the local scene, even as an opener for established artists like Alice Merton, Trombone Shorty or Jennifer Hall, among others. In addition to that, fans might recognize Crystal as a contestant on “The Voice” (season 16) on television!