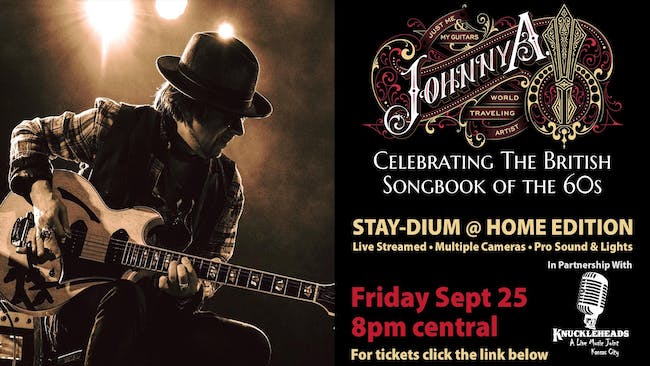 We're looking to keep the music going with some great live streamed shows and are proud to announce Knuckleheads is participating in the Johnny A. Just Me...And My Guitars "Stay-dium at Home" Virtual Tour. On Friday September 25th join guitar virtuoso, and former Yardbird lead guitarist, Johnny A. as he broadcasts live online celebrating the British Songbook of the 60s and beyond! Catch an amazing show in full HD from multiple cameras and pro audio all while supporting Knuckleheads, our staff, and touring musicians when we can't be together.

It's easy. Click https://johnnya.club/Knuckleheads_KC to buy your tickets today then return to JohnnyA.Veeps.com at showtime!!!

Boston Hall of Fame inductee Johnny A. is a Gibson and Epiphone signature guitarist (the Johnny A. Gibson is one of their most popular selling signature models) and is a spectacular performer guaranteed to mesmerize an audience with the 1st riff! Johnny has shared the stage with artists from BB King to Steve Vai and everybody in between and has performed at such prestigious festivals as Eric Clapton's Crossroads, the Montreal Jazz Festival, and Tokyo's Fuji Rock Festival. Coming back to his roots, Johnny has developed an intimate solo performance celebrating some of the greatest, and most influential, guitar work in history.

"On a cool Sunday evening on the last weekend of January, Johnny A. walked into a converted church in Mill Valley, California and showed what one guy, two guitars and about a dozen effects pedals can do. Playing two of his signature hollowbody Gibson guitars. Johnny set up a series of synchronous loops to create a soundscape that was both broad and deep, reverberating through the rafters of the Sweetwater Music Hall. After assuring the near-capacity crowd that nothing was pre-recorded, Johnny launched into a set that included some of his most popular songs celebrating the British songbook of the '60s and beyond!