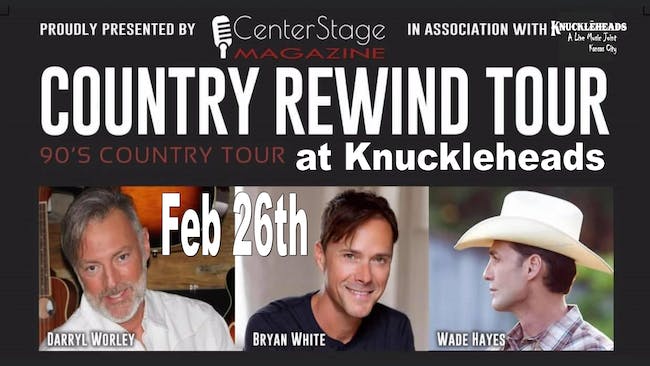 Darryl Worley is an American country music singer and songwriter. Signed to DreamWorks Records Nashville in 1999, Worley released four albums for the label: Hard Rain Don't Last, I Miss My Friend, Have You Forgotten?

Wade Hayes is an American country music artist. Country music's power has always been in its ability to reflect real life, and few artists have a stronger gift for capturing both heartache and hope than Wade Hayes.

In the past few years, the singer/songwriter has navigated a complicated journey that has produced some of the most potent songs of his already impressive career. Surviving stage IV colon cancer, not just once but twice, has given Hayes a unique perspective of the fragility of life and the strength of the human spirit. Those lessons learned are embodied in the songs on Go Live Your Life.

Bryan White is an American country music singer and songwriter. Signed to Asylum Records in 1994 at age 20, White released his self-titled debut album that year

**This is an externally ticketed event. You will be redirected to another site - Although this is event is happening at Knuckleheads, we are not is not selling the ticket to this event. For any questions regarding tickets, please contact Ticket bud.