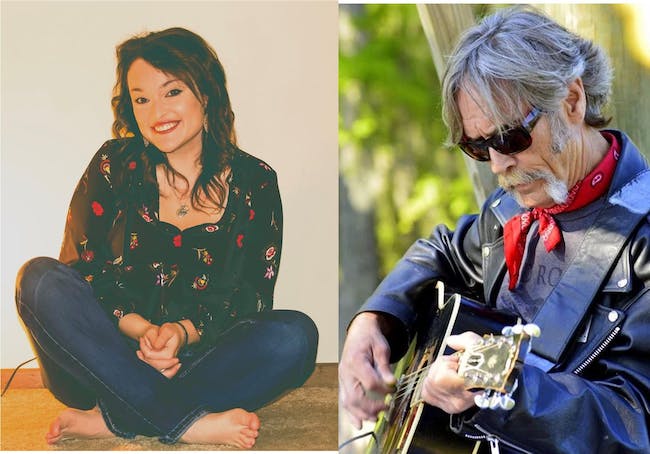 Billy Don Burns and Kayla Ray in the Gospel Lounge

Billy Don Burns is a true country music singer songwriter. His songs and scars are from the life he has lived and breathed....

"Billy Don Burns is a true Country Music Warrior. He wears his battle scars with honor, depicting the stories of his life in his songs with brutal and beautiful honesty. He’s respected far and wide for his long career in songwriting and performing, and he’s still out there. He’s lived it and breathed it through lifetimes of country music passion and pain. Carrying the guitar like a sword on his back, he battles for the Poet. He battles for the Artist. He battles for the souls who defy modern convention. And every time he strikes a chord in some smoke-filled Honky Tonk, he wins. Billy Don Burns started out in this business working with legends, and somewhere along the way he became one himself."

Kayla Ray delivers country music with rawness and honesty. Kayla was raised around worldly experience and heartache, and this rings loud and clear in her genuine delivery of pure country music. With her grandmother’s musical tastes a strong influence, growing up Kayla surrounded herself with music from our past. She poured over the work of country music giants such as: Patsy Cline, Loretta Lynn, Tammy Wynette, Tanya Tucker, Merle Haggard, George Jones, and Willie Nelson. Although the influence of these artists is prominent in her strong delivery and original truth filled lyrics, she has developed a truly unique and captivating style that is all her own.