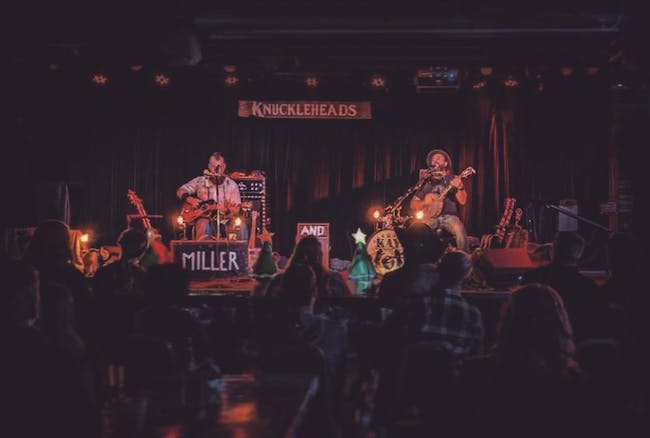 The Ben Miller Band is an American band that was formed in 2005 in Joplin, Missouri. The band's lineup currently consists of lead vocalist and guitarist Ben Miller, bassist, drummer, and back-up vocalist.

Pat Kay - Missouri native salutes the music traditional to the Ozarks; where Old-Time Fiddle music received a quick flash fry of foot stompin’ Country Blues as it made its way across the Mississippi River. The songs are a collection of stories, often ancient in verse but timeless in meaning, and carried with reverence for this forgotten music bred to uplift from the tangle of struggles in a bygone era. The arrangements and delivery, however, represent a convergence of music roots separated at birth in Western Africa where the banjo was conceived. It’s widely known that traditional bluegrass music doesn’t allow drums. In this, aptly coined “Stompgrass” music, percussion is not only encouraged, but required… and the ease with which a banjo and a hypnotic tribal rhythm reunite waves a fist in the face of convention. So, too, does the execution; with vocals, a kick drum, foot tambourine, guitar, banjo, harmonica, and more all incredibly being performed at the same time by one person.